If you roll northwards on McLean, you dead-end at James St in Frayser. Clustered around the intersection, there's an interesting project by United Housing, a non-profit which works with low-income housing. These houses are very cool, built to pretty good standards of insulation, with economical on-demand water heaters, and each has a set of eight solar panels on the garage roof.
The panels were made in Memphis by Sharp America, who have since stopped making solar panels in Memphis. The economics of the panels are attractive. The eight panels probably have a rating of just under 2000 watts, which means that, with an average of 6 hours of productive daylight, you'd expect to get something approaching 12 KWH (12 units on your utility bill) per day. This is worth about $1.20 off your bill per day, maybe an average of 35 bucks or so, and this is higher in the summer months when the AC is on.
There are still some tax incentives, in the shape of a credit, for installations like this, and you may qualify for some installation grants also. If you get a TVA/MLGW grid tie, you might be able to sell the energy to the utility for a higher price.
To build an installation like this yourself, you'd need approximately $2000 worth of panels, a solar controller in the $500 to $800 range and an inverter, to convert the 24V DC to alternating current, like you get off the mains. A 2000 watt inverter might start around $400 to 500. Then there is a mess or wiring, connectors and mounts, and you will need to hire an electrician if you want to hook it up to the grid, or contact the utility and jump through their hoops.
A grid this size won't power your home, but every watt you generate is a pile of coal they don't get to buy from Duke and burn at the Allen Fossil Plant, and thirty-something bucks per month is better than a poke in the eye with a sharp stick.
Payback looks to be in the order of 10 years and the panels come with a 25 year guarantee. There are a few little perks, such as the 'parasol effect' where the panels block 20% or so of the sun's heat. Mostly, doing a starter installation like this puts you in a good place to add more. Prices for panels have been in a historical decline, and fossil fuel will inevitably go up, so, at some point, you'd expect to be able to build up your home solar farm at incrementally lower costs. And, if you carefully research all the available grants and tax incentives, you may be able to trim these costs significantly.
The van in the pics is my solar-powered freezer truck, also with 1 KW of Memphis-built solar panels. This is how I have avoided tangling with bureaucracy as it is an off-grid installation. For anyone who has mobile power needs, the fact that automotive energy is much more expensive than grid power, and much of the available devices are awfully fuel-inefficient, gives a much better ROI calculation. Payback on the solar part of the truck conversion was less than a year. Opportunities for renewable energy are all around us. There is plenty of low-hanging fruit for homeowners and business folk who need to make our energy investments go to the bottom line.
United Housing has shown the way. These are neat and efficient houses that look very livable, probably much better than these leaky old Midtown houses. BTW is you know any low-income folks, it looks like some of the houses are still for sale.


Mr. Nolan is a member of local Facebook Advocacy group, Midtown Sustainability Alliance. He operates a small business based here in Memphis.

Learn more about Wolf River Bluffs on our website. 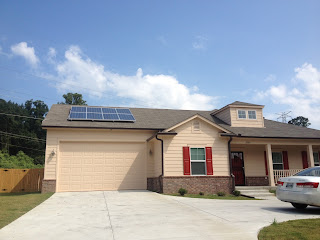